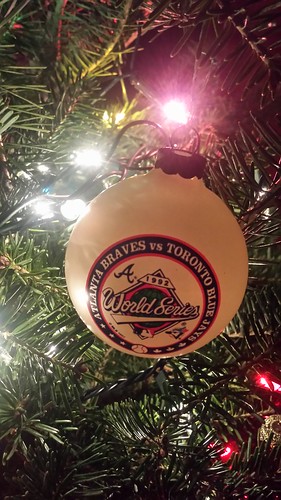 This was on display last night, and has been showing up for years: Fans get drunk, and then start throwing things or starting fights, either when the game takes a poor turn or just because they feel like it. It’s not all fans, or even most fans, but a consistent minority that could make the whole game experience unpleasant for anyone with the misfortune to sit near them. I used to enjoy sitting in the cheap seats in the 500 level, but gave up on it after being seated near too many belligerent fans. That cut down significantly on the number of games I attended.

But even aside from the disruptive drunks, I’ve found the general tenor of Rogers Centre crowds to be unpleasant. Fans seem quick to boo any decision that’s not beneficial to the Jays. I’ve seen fans boo “close” calls that were still unambiguously correct, as well as booing the opposing team for pitching changes, mound visits, and intentional walks. I get it: You want the Jays to win. But what’s the point of a win if the opposing team isn’t also trying to win? If you want to watch one team submissively roll over for your favourite team’s heroic exploits, watch the Harlem Globetrotters. (Do they still play? I don’t know.)

The result of all this was that I simply didn’t enjoy going to watch baseball games any more.

If fan behaviour had weakened my loyalty to the team, stadium security sliced it off completely.

This year, going to a Major League Baseball game meant walking through a metal detector. This is a very bad idea for many reasons: There’s no demonstrable threat to baseball stadiums, they wouldn’t deter any serious criminal or terrorist action if there was, and they’re so haphazardly implemented that they’re even less effective: When attending a game in April, I put my bag aside while I walked through the metal detector; when I was deemed appropriately metal-free, my bag was handed back to me without anyone even glancing at its contents.

Not that I want Rogers Centre employees rooting through my bag, inspecting my book, glasses, and sunscreen. Not that it would stop anything if they did; why try to smuggle a weapon into the Rogers Centre when there are so many potential victims crowded around the stadium before and after the game? MLB security policy manages to be unobtrusive, ineffective, and half-assed all at the same time.

These two points line up nicely to highlight the Blue Jays’ hypocrisy: In defending metal detectors, they claim “Fan safety and security is our priority.” But alcohol causes far more deaths and injuries – that is to say, it causes some – than sports-related terrorism. If you really wanted to ensure everyone’s safety and security, and weren’t interested in things like personal freedom or making money, stopping alcohol sales seems like the right move. Meanwhile, the Jays insist that  people getting drunk and throwing beer cans at the stadium was “not something that was a result of the sale of alcohol at the stadium.”

When you read accounts of the Jays’ heroic defeat of the Rangers, you come across sentences like this one: “The benches cleared again after Dyson smacked Troy Tulowitzki on the butt after he popped out to end the inning.”

I’m not sure that sentence makes more or less sense when you know that it followed a controversy about how much one should flip a bat after hitting a home run. It’s pretty stupid any way you look at it, since “benches clearing” just means a bunch of players ran on the field and started shouting, maybe a couple guys shoved each other a little, and then everyone went back to the bench. It’s stupid. It’s looked stupid every time I’ve seen it happen for the past 30 years.

No sport is free from testosterone-fuelled idiocy, but baseball players get angry about the silliest things. Unwritten Rules dictate everything from when it’s okay to hit other players to whether or not you should stop trying to score runs when you’re already winning. There are apparently even unwritten rules about when and where it’s okay to choke one of your own teammates because he said something you didn’t like.

This summer, The Star reported on Jose Bautista refusing to do interviews with Sportsnet. The reason? Sportsnet had taken rookie Devon Travis suit-shopping, but refused to pay for the suit. Now, perhaps there’s an actual principle in there somewhere, but it’s overshadowed by a player making $14,000,000 complaining that a player making $507,000 had to buy his own suit. (The saving comedic grace is the Star philosophizing about whether Sportsnet – which broadcasts Jays games and is owned by Rogers, which owns the Jays – might have run afoul of journalistic ethics had they run a suit-shopping story in which they paid for the suit themselves.)

Stuff like this has been going on forever, but I  lost my tolerance for it this year. It ranges from the idiotic to the offensively idiotic, and the end result is that a bunch of adults making millions of dollars look like spoiled-yet-feral children.

Last year, while travelling in New Zealand, I fell in love with the game of Rugby. It’s an exciting sport to watch, and feels different from anything I’ve been exposed to before. As it happens, the Rugby World Cup started in September, as the Blue Jays cruised into the playoffs, and it’s held my attention consistently.

The point is not necessarily that Rugby is better than Baseball. It probably is, but that’s not the point. I’m sure you could apply most of my baseball complaints to rugby, but I’m still rather ignorant of a lot of the game. Maybe spending 30 years intensely following one sport is too much; maybe knowing too much about players, teams, and stats wore me out. Maybe I’ll be bored with rugby after following it for 30 years; if this pattern holds, it’ll happen right around the same time Canada makes it to the World Cup finals.